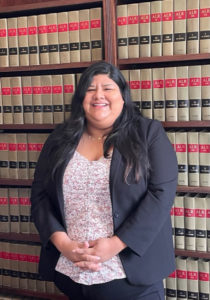 Attorney Lisa Raimondi graduated from Boston University where she majored in International Relations with concentrations in Systems and World Order and European Affairs. She spent a semester of study abroad in Geneva, Switzerland where she worked for doCip, a human rights organization, in conjunction with the United Nations of Geneva.

As a law student, Attorney Raimondi worked as a judicial intern for the United States Court of Appeals for the First Circuit, the Massachusetts Supreme Judicial Court, and the Massachusetts Superior Court. She also received the Michael Dukakis Internship in Public Service Award for her work with the Rhode Island Attorney General’s Office. During her last year in law school, Attorney Raimondi worked as a student prosecutor with the Bristol County District Attorney’s Office as a part of the University Massachusetts School of Law Prosecutor’s Clinic.

Attorney Raimondi joined Beauregard, Burke & Franco as an associate in 2021. She handles complex cases in many areas of civil litigation, including employment, business, property, and personal injury law.

Attorney Raimondi is licensed to practice in the state courts of Massachusetts.