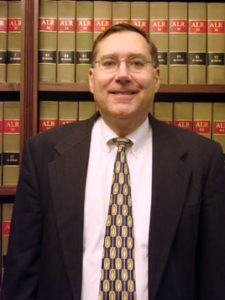 Attorney Burke has tried many personal injury, employment, real estate, business and governmental law cases in the state and federal courts of Massachusetts. He has successfully argued cases in the Massachusetts Appeals Court and the Supreme Judicial Court. He represents a local union and served as general counsel for a local school district. Attorney Burke regularly advises clients in municipal and non-profit corporate matters.

Attorney Burke has served on the faculty of MCLE’s annual Trial Advocacy Institute and is coauthor of a chapter in the MCLE book Massachusetts Motor Vehicles Torts. He is also past president of the Board of Trustees for the Zeiterion Theatre in New Bedford.